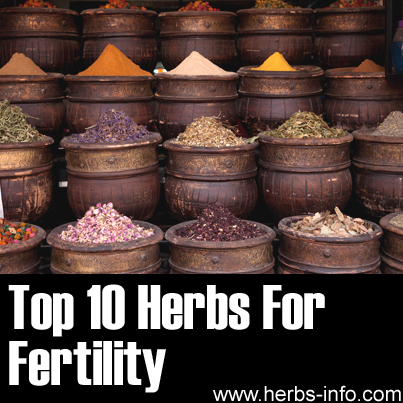 With more and more single men and women opting to marry at an older age, fertility issues have also been on the rise the past years. Add this to various modern stressful factors that prevent many couples to relax and you end up with less conducive environments or natural conditions that allow conception. [1] Nowadays, you may have unconventional ways to treat fertility problems like vitro fertilization but these are often costly and only have a proven modest success rate in the U.S. [2]

One way of letting nature takes its course to combat fertility woes would be using specific herbs. And while the compounds needed to address male fertility may be different from those of women, these are some common herbs that may be able to help: [2]

Highly rich in vitamins, calcium and magnesium, red clover assists in regulating reproductive health issues like women suffering from irregular menstruation [3] or cervical mucus problems. Red clover assists in the detoxification process of your internal reproductive organs to make way for a successful conception. [4] Brewing this herb and infusing as a tea also releases its alkalizing properties to correct any hormonal imbalance preventing conception. [1]

This rare herb promotes both male and female fertility. Among females, it helps with ovarian pain , [5] menstrual cycle problems and recurrent miscarriages due to weaknesses along the uterine and cervical areas. [4] Among males, it helps remedy common problems arising from male impotence. [3]

This herb is rich in iron to normalize menstrual bleeding [4] as well as folic acid to prevent birth defects and allow proper cell division as couples try to conceive. [3] Aside from promoting healthy uterine conditions, stinging nettle strengthens kidney and adrenal glands functioning and is high in vitamin K which are all needed to prepare for conception and birth. [1]

Also known as angelica, this popular ancient herb improves blood circulation due to its iron-enriched roots and regulates hormonal conditions to strengthen the uterus. Moreover, it builds a healthier immune system and combats depression, fatigue, stress and other negative emotions often linked with fertility problems. [4]

To tone your uterine lining, wild red raspberry leaves may be taken in your entire menstrual cycle to normalize it. [5] To achieve optimal results, you can complement this herb with other fertility promoting herbs like the Red Clover. [1] Furthermore, the benefits of red raspberry leaves extend all the way during pregnancy by helping with morning sickness and alleviating leg cramps. [3]

This yellow flowering plant is known for its fertility benefits both for men and women an has been considered to be aphrodisiac, particularly in the orient. For thousands of years, tribulus has been regarded as one of the most potent plants used in Ayurveda and Traditional Chinese Medicine (TCM) to enhance the fertility of males and females.

According to studies, tribulus has the ultimately ability to increase the production of sex hormones in men and women, by stimulating the increased production of estridiol and FSH in women, and enhancing men’s testosterone and LH production.

Furthermore, it helps in normalizing the ovulation cycle in women as well as in enhancing men’s motility, health and sperm count. Acting as overall tonic both in male and female body, tribulus also promotes the production of DHEA in male bodies which plays a major role in the treatment of erectile dysfunction. [6]

This herb is known as an excellent reliever for dysmennorhea, PCOS, uterine fibroids, and endometriosis. White peony is thought to yield better results on enhancing fertility when combined with other fertility herbs. It contains paeoniflorin compound that is known for its anti-spasmodic effects, analgesic properties and muscle relaxing benefits. [7]

Considered as one of the most versatile herbs which combine well with other healing plants, yarrow is a well known fertility plant that works by stimulating the uterus to encourage menstruation and in regulating normal menstrual flow. It also contains anti-inflammatory and antispasmodic properties that help in dealing with menstrual cramps.

Yarrow also works by relieving the congestion and inflammation of the uterus. This leads to pain relief and better circulation in the reproductive system. It also relieves heavy bleeding which is normally triggered by ovarian cysts, endometriosis and uterine fibroid. [8] It also aids in finding the appropriate ground for the implantation of fertilized egg cells. [9]

This plant has been widely considered since old times as an excellent aphrodisiac for both men and women. In the 19th century, it was a part of the pharmocopoiea and accepted by many orthodox practitioners as effective. Normally taken as tea or tincture, damiana is also believed to be regulating the women’s menstrual cycle. It is also thought to help women by nourishing their reproductive system. [10]

A native plant from Peru which is usually in capsule form, Maca is known to be a potent plant that enhances male and female fertility. For men, it is claimed to help in boosting libido and enhancing one’s sperm count. On the other hand, its reported benefit for women is by regulating the production of reproductive hormones as well as in improving the health of their egg cells. It also aids in the treatment of endometriosis and PCOS (poly cystic ovarian syndrome) which normally trigger infertility. [10]

Notes - It is advisable to identify the underlying cause behind fertility problems as there are many other herbs that are suited for specific types of conditions, from addressing specific menstrual problems to poor sperm health to even libido issues. [4] It's also advisable to get professional medical consultation and this page is not medical advice.

Since herbs are often milder in action compared to other synthetic counterparts, results may not be immediate. Hence, it is crucial to use these herbs in the early stages of planning conception and to use them consistently. [3] However, consult a professional first in the event that you also use prescription or over the counter drugs as some herbs may adversely contradict the effects of these drugs.