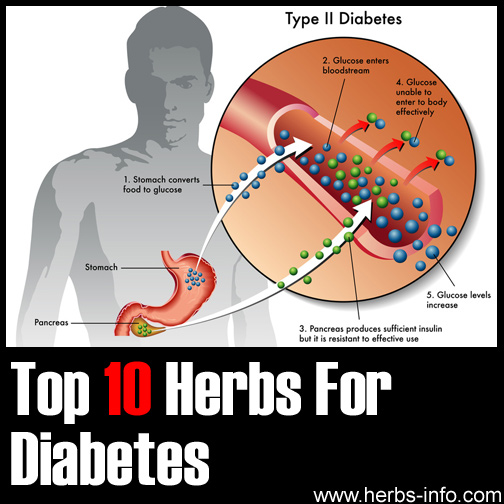 Diabetes is a very common chronic (long term) metabolic disorder. It results from uncontrolled glucose levels in the system due to insufficient insulin (produced by the pancreas) to break down sugar. Your cells could also have become resistant to insulin. There are two types: Type 1 diabetes requires daily insulin shots and can onset rapidly - however type 2 can sometimes occur without people being aware that they have it. [1]

While medical treatments usually entail changes in your lifestyle, diet, weight, physical activities and involve prescription medication, it cannot be discounted that herbal remedies possessing anti-hyperglycemic properties have also become increasingly common, if not necessary, to regulate blood glucose concentration in the bloodstream. [2] Studies have shown that these herbs can naturally help diabetics through any of the following mechanisms: increased insulin secretion and sensitivity, inhibition of intestinal absorption of glucose, improved uptake of glucose by adipose and muscular tissues and prevention of glucose production by hepatocytes and anti-inflammatory activities. [3]

Here are 10 of the most popular herbs that are esteemed by herbalists to be able to help diabetics:

Used in herbalism for the treatment of diabetes for nearly 2,000 years. [4] its exotic sounding name is due to this plant being a native in southern and Central India [5] which aptly means "sugar destroyer" in Hindi. [6] This plant indeed lives up to its name by having potent effects on diabetes as research has demonstrated it can regulate blood sugar levels at a typical dosage of 200-250 milligrams taken twice a day. [7] Studies show that its ability to control blood sugar is partly due to resulting decreased sensitivity to sweetness and partly due to increased activity of enzymes that stimulate insulin production or glucose usage. [5] However, because consumption has been shown to cause some side effects, [7] it is best to talk with a medical professional prior to using Gymnema.

This is good news for diabetics with a sweet tooth as many baked goods today employ cinnamon to replace sugar and be more diabetic friendly. [8] In an August 2012 study conducted by researchers, subjects were asked to take 3 grams of cinnamon everyday throughout an 8-week period to assess its effects on glycemic conditions. The study concluded that cinnamon does have moderate effects in improving blood sugar levels. [3]

This might not sound tasty but bitter melon extracts and juice have been found to lower blood sugar, whether in type 1 or 2 diabetic sufferers. Studies suggest that the compounds in bitter melon are similar to those of insulin [8] which blocks sugar from your intestines and allows more effective glucose consumption. [7]

This Chinese herb is well-known and praised for benefits to the immune system and as an overall vitality booster but more than this, its effect on glycemic control is very well documented: Analysis of 16 randomized controlled trials in 770 participants showed that Panax Ginseng supplementation significantly lowered fasting blood glucose. [5]. Further good news - a study has found Ginseng (Panax Quinquefolius L.) to be safe for long term use in type 2 diabetic patients. [5b] It is reported that ginseng slows absorption of carbohydrates while increasing glucose usage and insulin secretion by the pancreas. [6]

This herb doesn't just have culinary purposes but several animal and human clinical trials have also shown its ability to increase insulin sensitivity and production due to high amounts of amino acids it contains. A larger study on seeds of fenugreek shows that 60 participants who took 25 grams of fenugreek daily had major improvements in their blood sugar levels. [6]

According to studies, the fruit of prickly pear cactus plays significant role in lowering the level of sugar in the blood. Apart from the fact that its fruit is an excellent source of fiber, researchers believed that it contains high levels of chemicals that have similar functions with insulin. [9]

This powerful herb is known to be useful in stabilizing the body's insulin level. The leaves of billberry are believed to be effective at lowering the level of sugar in the blood as well as in reducing one's risk for diabetes later on. Normally, a handful of billberry is made into cups of billberry tea that is effective in lowering blood sugar. [11]

This herb is known for its hypoglycemic effects. It contains potent compounds like allicin that efficiently deals with excessive levels of glucose in the blood. [12] Allicin is the compound responsible for garlic's taste and odor.

Furthermore, garlic plays an essential role in stimulating the production of beta-cell insulin which helps combats high blood sugar. [13]The antioxidant content of garlic is beneficial in eradicating free radicals, which when left untreated can contribute to the development of heart diseases, cancer and of course, diabetes. [14]

When people talk about garlic, onion usually follows. Just like garlic, onions also play important roles in treating and preventing diabetes. Onions contain high concentrations of flavonoids which are believed to have positive effects in optimizing the level of sugar in the blood. Some researchers claimed that consumption of raw onions can significantly reduce the level of sugar in the blood among Type II and Type I diabetics. [15]

This fruit is probably one of the safest and most beneficial foods to take if you are diabetic. It contains high levels of soluble fiber which is good for people suffering from Type II diabetes. Its pectin content plays a vital role in regulating the level glucose in the blood by gradually releasing sugar into the bloodstream. Pectin, which is normally found in the pulp and rind, serves as the body's detoxifier because it produces galacturonic acid. This type of acid is capable of removing toxic wastes from the bloodstream thereby reducing a diabetic's insulin requirement by more or less 35%. [17]

Apart from its ability to regulate bowel function and sugar level, intake of apples is also useful in enhancing wound healing. Its fiber content is known to possess anti-inflammatory effects that help diabetics to recover from infections swiftly.

Of course, if you're already taking insulin or other hypoglycemic medications to control your blood sugar level, you should be aware of how these herbal remedies can potentially interact with these drugs. [8] As such, it's wise to always consult your physician beforehand. As with the rest of this site, this page is not medical advice, not a substitute for professional evaluation, and not a recommendation to self-medicate. Please see full disclaimer in "the small print" at the foot of the page.

[5] The Effect of Ginseng (The Genus Panax) on Glycemic Control: A Systematic Review and Meta-Analysis of Randomized Controlled Clinical Trials. http://www.ncbi.nlm.nih.gov/pmc/articles/PMC4180277/