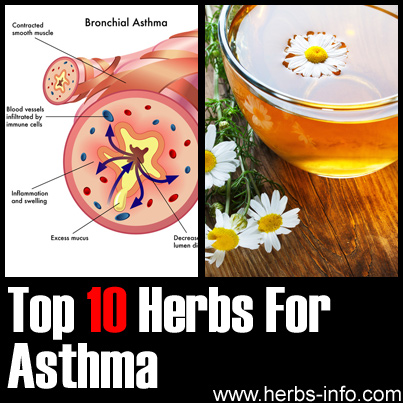 Perhaps one of the most terrifying experiences to undergo is to gasp for oxygen. Struggling to breathe can be horrifying for someone who is having an asthma attack. Consequently, you attempt to do all things possible like continuously coughing or wheezing as a way to obtain more air.

Such is the reason why asthma can be a life threatening respiratory condition. When asthma suddenly attacks, your airway muscles constrict and mucus membranes produce excess mucus, blocking your breathing. [1] Allergens like dust, spores, mites and animal hairs could trigger asthma. But so can cold air, infection and even stress. [2]

Way before inhalers, tablets and other pharmaceutical medications were developed, people relied on herbs to alleviate the symptoms of asthma. Herbal medicines may be able to help prevent it, reduce the severity of the disease, as well as control its symptoms. Though herbal medicine is regarded as a form of alternative medicine, more and more medical practitioners are now recognizing the benefits that can be offered by using herbs.

There are a number of benefits that can be attained by using herbs for asthma. One of the main benefits that can be attained by using this form of medicine is that herbs can help strengthen your immune system. As opposed to most pharmaceutical asthma medicines, herbs are abundant in minerals and vitamins that not only prevent asthma attacks, but also boost your immune system. With herbal medicine, you are fortifying your body’s ability to fight off against pathogens that cause asthma and other medical ailments.

Herbal medicines, as the name implies, are free from synthetic components, and are composed of natural ingredients. If you are suffering from asthma, and you are looking for a safer and a more natural way to manage it, make sure to consider these herbs:

For centuries, Chinese have used turmeric to alleviate the symptoms of asthma. [4] Aside from alleviating the symptoms of asthma, turmeric can also be used to treat a wide variety of diseases like fever, cold, flu and many more. Turmeric has carminative, antibacterial, stimulant, astringent and antiseptic properties.

Studies have indicated that hyssop has anti-inflammatory properties on lung tissue and thus has potential as an asthma treatment. It also has antiseptic, antibacterial and antispasmodic properties, which may assist in reducing the distressing symptoms of asthma. In addition to that, hyssop is considered beneficial with other respiratory infections like bronchitis, phlegm, pleurisy and lung disorders. When using hyssop, however, make sure to use it for a short span of time since excessive usage of such herb can possibly lead to toxicity.

Traditionally, licorice has been used to restore breathing and calm the air passageways. [5] Allergic asthma in particular has been found to be linked to pulmonary inflammation. Studies extracting the compounds present in licorice have discovered that they not only reduced this inflammation but also promote the necessary lung cell cultures to respond to antigen stimulation. [6] Licorice is a potent herbal remedy that should be moderately used to avoid unexpected side effects like headaches and hypertension. [7]

Medicinally used as a cough suppressant, [5] coltsfoot is also considered helpful for those recovering from asthma attacks. A study on 66 cases of asthmatics was conducted where 35 of which were given 15g of coltsfoot for 10 weeks. Results showed that even minimal airway obstruction present among sufferers in the convalescent stage can be reversed. This is crucial to prevent more severe conditions like emphysema. [8]

An expectorant herb, grindelia is also known as an effective anti-asthmatic herb. It is probably why it is included in the 1983 British Herbal Pharmacopoeia for bronchial asthma as well as an official part of the 1882-1926 United States Pharmacopoeia and the National Formulary from 1926-1960. Its dried leaves and flowering tops are often found in natural formulations for asthma. [5]

For the most part, gingko biloba is used as a memory enhancer. However Gingko biloba is also considered a good antihistamine and has anti-inflammatory properties as well. Doctors have found that extracts of this ancient medicinal plant help prevent asthma attacks triggered by allergens and exercise. [1] They have found that appropriate dosage of gingko works by inhibiting the platelet activating factor (PAF) to reduce airway hypersensitivity of asthma sufferers. [7]

The Mayo Clinic reports that this native European perennial plant has a chemical known as petasin which inhibits the molecules involved in the airway inflammatory response during asthma attacks-- histamine and leukotriene. [1] This leukotriene inhibiting property of butterbur extracts is responsible behind promising researches that suggest this herb to be an inhibitor of allergic disorders. [9] Likewise, a 2004 study in Germany has discovered that when butterbur extracts were given to sufferers for at least 2 months, both incidence and severity of asthma attacks decreased by half and 80-90 percent respectively. [1]

Growing abundantly in North America, the bark of slippery elm is thought to be effective in dealing with different sorts of skin ailments. Though more scientific studies are yet to be conducted to confirm the effectiveness of slippery elm in helping people with asthma, preliminary studies conclude that slippery elm bark can really be useful. When taken as tea or capsule, slippery elm helps in preventing bronchial spasms which are normally associated with asthma. In fact, it is highly recommended to people diagnosed with respiratory conditions like bronchitis and cough. [10]

You will be surprised to know that garlic, which is readily available in your kitchen, is actually considered an excellent remedy for asthma. Though often used as flavor enhancer in culinary, garlic has proved itself to be worthy in managing asthma. Research shows that this herb contains active compounds that may help cure and eliminate symptoms that are associated with many respiratory and cardiovascular disorders. Garlic is known to contain twice as much Vitamin C than tomatoes.

The Vitamin C content of garlic helps in neutralizing free radicals that contribute to the contraction of airway smooth muscles which only aggravate the condition of asthma sufferers. Second, its Vitamin C content helps in breaking down histamine and in preventing the release of histamines out of the body. Histamine is one of the major contributors to allergic reactions and inflammation experienced by those diagnosed with asthma. Third, garlic helps in stimulating an increased production of prostacyclin, a compound that keeps the lung air passages open. This results to easy breathing in asthmatic patients. [11]

[8] Measurement of MEFV in 66 cases of asthma in the convalescent stage and after treatment with Chinese herbs. http://www.ncbi.nlm.nih.gov/pubmed/2611953