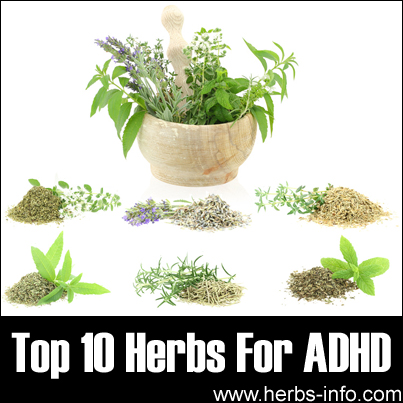 Although the American Psychiatric Association establishes 10 symptoms to diagnose the controversial ADHD, this common "disorder" can be identified by 3 main characteristics: impulsivity, distraction and hyperactivity. [1] Interestingly, ADHD is also a uniquely American phenomenon as 90 percent of Ritalin produced worldwide is consumed in the United States - leading critics to the opinion that ADHD is not a real condition, with wild accusations flying that the medications are over-prescribed. The onset of symptoms also often appears during childhood with the National Institute of Mental Health estimating 3-5% of American children suffering from ADHD. [2]

Whether or not this is true, reported ADHD cases are on the rise and because prolonged use of drugs in children poses some risk, interest in developing alternative treatments has also heightened in recent years. [3] This includes scientific studies conducted on specific herbal aids like the following:

The irony with Ginseng is that researchers have found it has ability to increase energy and focus while still producing relaxing effects. This makes it one of the better herbal alternatives in improving cognitive performance and attention span among ADHD patients. [2] Evidence shows the ginsenosides it contains stimulate the dopamine pathways that are often deficient in ADHD. Likewise, ginseng has been shown to normalize norpinephrine level which is another neurotransmitter that goes out of balance during ADHD. [4] Consequently, this is why ADHD patients have exhibited improvements in hyperactivity, inattention and immaturity when given Panax Ginseng as alternative treatment. [5]

Like Ginseng, scientists are finding evidence that shows St. John's Wort as a promising herbal treatment for ADHD in terms of improving ADHD symptoms. [6] This plant is considered one the calming herbs to help with sleep difficulties especially among children who are medicated during the day. [4] Aside from also influencing norpinephrine and dopamine levels, research suggests St. John's Wort likewise regulates serotonin and GABA which are the brain's neurotransmitters responsible for improved moods and relaxation respectively. [2]

There is scientific basis that shows valerian, together with passion flower and lemon balm, are useful herbal ADHD aids that promote beneficial physiological actions. [1] Which is why a combination of these mild sedative plants often make up herbal formulas for ADHD to decrease anxiety, nervousness and restlessness. [4]

As with Valerian, Passionflower is an important herbal medicine used for treating generalized anxiety disorder among ADHD sufferers. Studies also demonstrate how passionflower can have pharmacological value in modulating GABA receptors. [7]

Though mainly used in aromatherapy, lavender still offers promising results in alleviating the suffering of people diagnosed ADHD. To people with ADHD, nervousness and sleeping difficulties are very common. Lavender actually works by relieving tension and inducing sleep. This makes lavender very handy in dealing with such discomforts. Commonly used as oil, lavender can also be used as tea, bath products, scented candles or dried lavenders can just be placed strategically around the house. [1]

Results of the study conducted at the University of Maryland Medical Center revealed that lavender oil has better effects than rosemary oil in mood and cognition. Apart from its calming and relaxing effects, lavender also helped in improving concentration, stabilizing the mood and in reducing anxiety.

Known for its calming and relaxing effects, kava kava is a marvelous herb that can be of great benefits to people suffering from ADHD. Kava kava is considered as safe to use even by children. Known to treat anxiety, this herb is very effective in calming patients with ADHD. It can be taken as tea, or in capsule form. [3]

Kava kava is also known for its fast-acting sedation effects and unique relaxing properties. Compared to pharmaceutical ADHD treatments, this herb doesn’t cause the sensations to dull, and doesn’t impair mental processes. The herb’s sedating properties is actually caused by its 6 kavalactone compounds that bind the receptors of the amygdala. This area of the brain regulates fear and anxiety.

Licorice is known for its medicinal and healing properties. It is highly recommended for people suffering from hyperactivity, which is a very common symptom of ADHD. It plays a major role in the proper functioning of the adrenal glands, sweat glands and the endocrine system which facilitates in the occurrence of mood swings. [5]

Licorice also plays a vital role in stabilizing the level of blood sugar. Hyperactivity is usually associated with high level of glucose in the blood.

Occasional use of chamomile can also be beneficial in dealing with ADHD. As you may have already known, sleep difficulties are very common to people diagnosed with ADHD who are currently under treatment. When used occasionally or judiciously, chamomile offers a calming effect that enable patients to drowse. [6]

Several scientific studies have supported the claim that intake of chamomile tea can significantly help in relieving the symptoms of ADHD especially in children. Results showed that chamomile makes an excellent treatment for insomnia and anxiety. Furthermore, its soothing properties improve mood states and anxiety levels. [7]

Chamomile actually works on the central nervous system by promoting calmness and easing anxiety. In a study conducted in Italy, the researcher found out that occurrence of certain behaviors like distraction and hyperactivity were significantly reduced when subjects were treated with chamomile. [8]

This is probably one of the most popular herbs for ADHD in children. It is highly reputed for its positive impact on children suffering from ADHD. Research shows that it helps in improving mental clarity, focus and attention as well as in enhancing one’s mental performance. When combined with other mild herbal sedatives like passion fruit and valerian, excellent results are achieved. They are actually beneficial in reducing anxiety, restlessness, fidgeting and nervousness especially in children. [9]

In ancient Europe, this herb is used to improve appetite and sleep as well as in reducing stress and anxiety. Lemon is noted for its ability to improve one’s sleep quality without causing daytime sleepiness. This herb is considered safe to use even by children. [10]

Clinical trials and research on herbal aids for ADHD are by no means perfect. But as interest and understanding about ADHD continue to grow, so will scientific knowledge about these herbal treatments be of significant importance as complementary, if not alternative solutions, for ADHD.