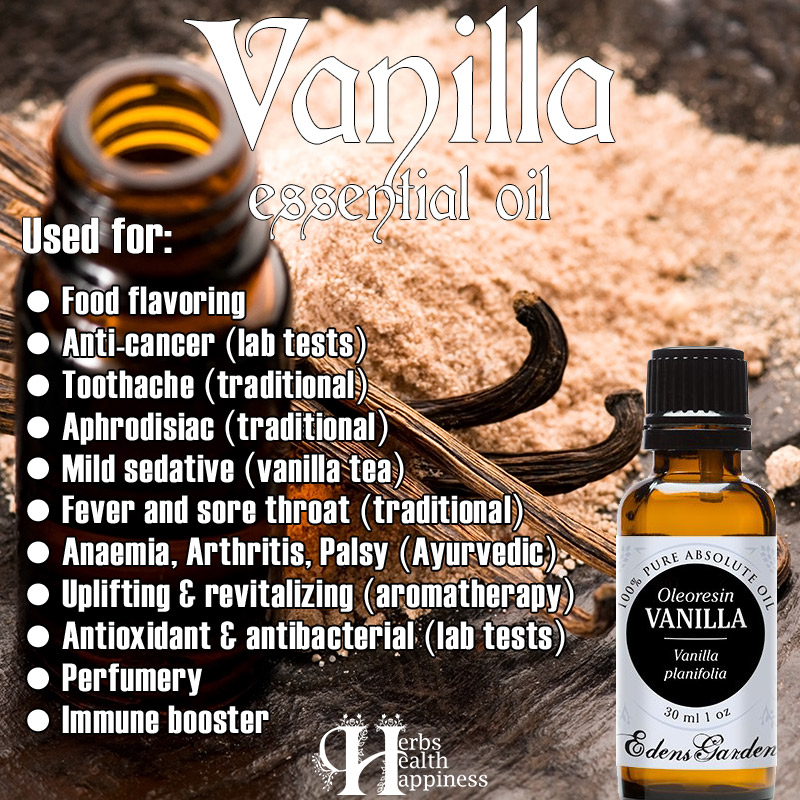 Vanilla is a flavoring and scent derived from Vanilla planifolia, a species in the genus of Vanilla orchids. The Vanilla orchids are evergreen, vine-like plants and they occur worldwide in tropical and subtropical regions. It is widely used both as a food flavoring and by the perfume industry. The fruit of V. planifolia is known as the "vanilla bean" but it is not a true bean. It is however a seed pod - and it is the pod that is used to create the vanilla flavoring / scent. [1][2]

Described as the world's most labor-intensive crop, vanilla is expensive - and of the spices it is second only to saffron in price. Madagascar is now the world's largest producer of Vanilla, with Indonesia second.

Vanilla essential oil finds itself listed among the fragrances commonly considered to be aphrodisiac.

Vanilla contains vanillin - the substance responsible for its aromatic flavor and scent. Cured vanilla pods are around 2% vanillin - and this is produced through a complex and lengthy curing process of the pods. Vanillin is now also manufactured artificially owing to the high cost of natural vanillin. The demand for vanilla has been higher than the supply for a long time. In addition to food flavoring and the fragrance industry, vanillin is used in the manufacture of pharmaceuticals. [3]

The flavoring quality of vanilla was known to the Aztecs and they added it to their chocolate drinks. It is said that they derived their knowledge of it from the ancient Totonaco Indians of Mexico - and in those times it was called Tlilxochitl[4] which has been interpreted as meaning "black pod". [5]

It was brought back to Europe in around 1520 by Cortés (1485-1547) [6] and, in continuation of the Aztec tradition, was combined with Cacao to make the exotic, luxurious Chocolate drink only available at that time to the rich and elite of Europe. It was not until 1602 that Hugh Morgan, Queen Elizabeth's apothecary, suggested that it could be used as a flavoring agent in its own right. [4] Morgan was a collector of plants and traded in spices, and had been appointed to Queen Elizabeth in 1583. [7]

Vanilla held a curious reputation as an aphrodisiac in old days. References to this begin to appear (suddenly) in the medical and botanical literature of the early 19th century. Robert Hooper and John Quincy's 1817 A new medical dictionary states "Vanelloes have an unctuous aromatic taste, and a fragrant smell like that of some of the finer balsams heightened with musk. Although chiefly used as perfumes, they are said to possess aphrodisiac virtues."[8]

Several other accounts of the same period make similar statements - often clearly borrowed or compiled from each other or other authors. It is also possible that, as Vanilla is from the genus Orchieae, origin of the aphrodisiac rumor may have stemmed from the fact that orchids in general had already been considered aphrodisiac, and the vanilla ended up grouped with them. However, an earlier account gives a deeper clue: Bartholomew Parr's The London Medical Dictionary of 1809 states: The only other genus [of Orchid] employed is the epidendrium, which furnishes the vanilla. This also is nutritious, and, in the opinion of Linnaeus (Amaenit. Academ. vol. vii.), aphrodisiac.[9]

The book referred to is the Amoenitates Academicæ; Volume 7 was published in 1769 - and, interestingly, the entry for Vanilla is in a chapter entitled "Potus Chocolatae" - "Chocolate Drink." Here is the original Latin: 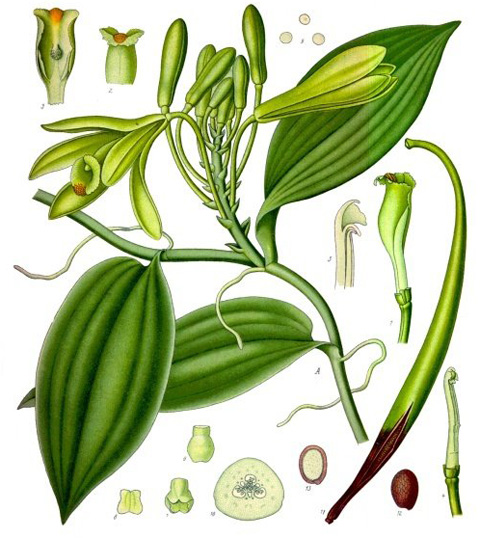 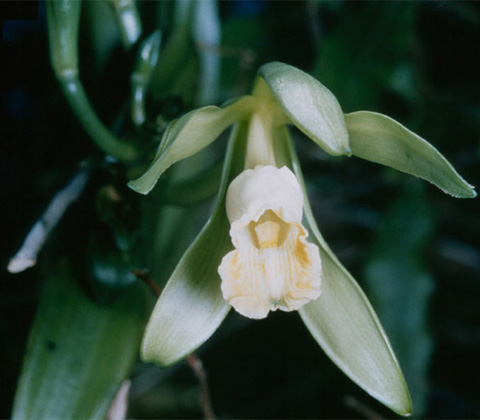 I attempted to translate this using online translators, but they were not sufficient for the purpose. My Latin is slightly rusty so I will not attempt it now - but, Linnaeus clearly ascribes both medicinal and aphrodisiac qualities to vanilla. He cites Etienne-François Geoffroy's 1741 Tractatus de materia medica - and Geoffroy devotes some four pages to vanilla. [11]

Several other works prior to Linnaeus mention vanilla. The earliest reference to it I can find in literature is the 1651 edition of Francisco Hernandez' Rerum medicarum Novae Hispaniae (p.38) [13] Hernandez (1514-1587) was an important naturalist and physician of his day and he spent 7 years (1570-1577) collecting and classifying the plants of the New World. It is likely that Hernandez' account of Vanilla is the earliest European description of the plant.

The scent of Vanilla stated to be calming, sensual and sometimes described as aphrodisiac. Vanillin is considered the most significant component of vanilla, and over 1,000 studies appearing on Pubmed reference vanillin. There are in fact over 150 other minor components - and these contribute to the overall fragrance and character of vanilla. [14]

The Green Vanilla Store states that the molecular structure of vanilla essential oil is similar to that of human pheromones - and that vanilla was considered aphrodisiac by the ancient Totonacos, who had the plant before the Aztecs. This source also states that the Smell and Taste Treatment and Research Foundation in Chicago has found that vanilla can both promote sexual arousal and aid falling asleep. [15]

I found an intriguing reference to a 1762 German study - which found that medication based on vanilla extract cured impotence in all 342 human subjects. This seems at first glance unlikely but I cannot find the original study to investigate further. [16]

Adulteration and synthesis of vanilla

It's important to note that natural vanilla is often substituted with synthetically produced vanillin. Vanilla also has a very long history of adulteration and in the past Mexican vanilla extracts have been found to be adulterated with coumarin, presumably from tonka beans. Coumarin is prohibited from foodstuffs by the FDA. [14]

Also, I read that artificial vanilla fragrance, such as that which may be found in some scented candles and fragrance products, may actually be piperonal - which may damage our scent receptors in the long term. [17]

Vanilla fakery has become a complex science - and as genuine vanilla is up to 200 times as expensive, there is much financial incentive for fraudulent product. [18] has what appears to be an excellent article going in depth into the subject of vanilla synthesis.

Vanilla essential oil cannot be steam distilled as some components are not captured by this process. It was once extracted using hydrocarbon solvents, but (thankfully) this process has been made redundant by the new CO2 extraction, which yields an accurate vanilla that is not adulterated with the chemical residues that might be left by solvent extraction. [19]

Vanilla is listed in the AHPA's "Herbs of Commerce", p.151 [20] and is widely available. It is said to be "Generally Recognized as Safe" although some people may be sensitive to it and workers in the vanilla industry have reported headache, dermatitis and insomnia. [14] This is not medical advice.

Note that we also have a further articles describing in depth the herbal uses and benefits of vanilla.