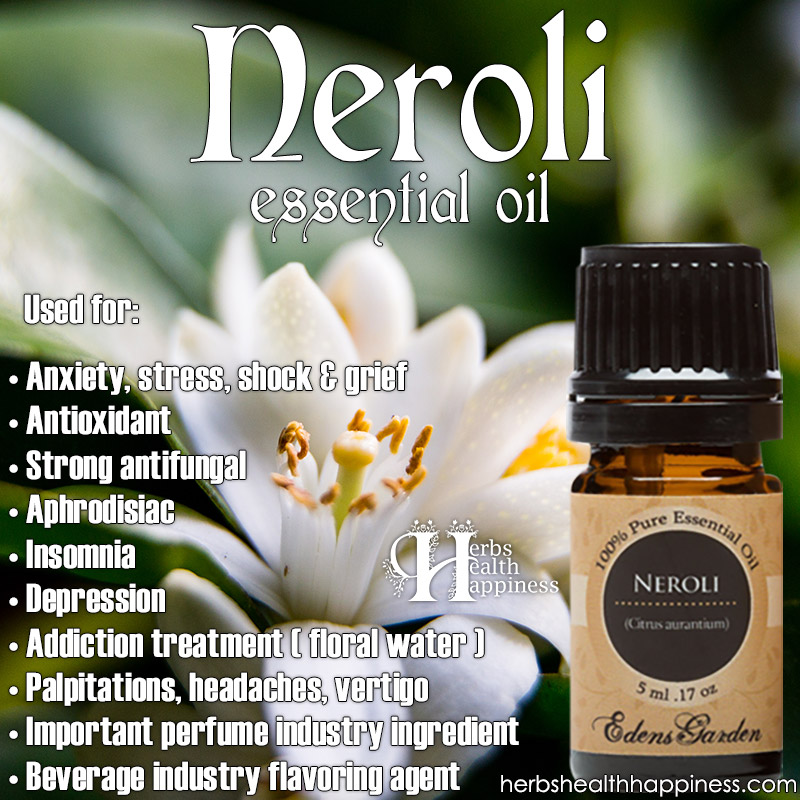 Neroli Essential Oil - also known as Orange blossom essential oil is an essential oil made from the flowers of a variety of Bitter Orange Tree - Citrus aurantium var. amara (also known as Citrus vulgaris or Citrus bigardia). It has a similar scent to bergamot, another citrus used in food flavoring. Neroli is produced by water distillation as opposed to steam distillation - as the fragrance is too delicate and would be denatured by the higher temperatures of steam. [1]

Also, do not confuse neroli with niaouli. Niaouli is something completely different and is nothing to do with citrus - but is an oil extracted from Melaleuca viridiflora, a large evergreen tree.

Neroli as anxiolytic: Neroli is widely used in aromatherapy - being indicated to ease tension, relax and increase circulation. It is considered very relaxing and its use as an anxiolytic is well established. [2][3] Neroli is also listed as an ingredient in essential oil blends given for shock or grief. It is suggested for several conditions related to nervousness - insomnia, headaches, palpitations, fear, depression, neuralgia and vertigo. [2][4]

Neroli for stomach conditions: Neroli has also been suggested for colitis, stomach upsets and diarrhea (as part of an massage oil blend or in a bath.) [4]

Neroli as beverage ingredient: Neroli is also used as a beverage flavoring. It is rumored to be one of the ingredients in the "secret" Coca-cola recipe, and is used in Grand Marnier, a brand of alcoholic drink.

Neroli as antimicrobial: Neroli has been found to have antimicrobial activities in lab tests against Gram-positive and Gram-negative bacteria. It was also found to have "very strong" antifungal activity (stronger than the standard antibiotic Nystatin) against the fungus types Aspergillus parasiticus, Mucor ramannianus and Fusarium culmorum[5]

Neroli as antioxidant: Neroli has been found to be an antioxidant with free radical-scavening capability. [5]

Neroli as perfume ingredient:The oil and its derivatives are among the most widely used floral oils in perfume manufacture, often being used as a primary ingredients. Neroli has been used by in perfumery for hundreds of years and is a very agreeable and popular scent. [1]

Neroli as acne treatment: Some citrus oils are used (highly diluted) in topical acne treatments. Limonene, a primary component, has been found antibacterial and also dissolves sebum, therefore assisting with pore cleansing. However in this regard it might be more appropriate to consider lemon or orange essential oil due to the reduced cost. [6]

Neroli as aphrodisiac: Modern literature lists neroli as one of the "aphrodisiac" essential oils. In old times, neroli was recommended by the Arabs as a cure for impotence [7] and various other traditions associate it with marriage, fertility and even seduction. In the 19th century, orange flowers were carried by brides on their wedding day or attached to their hair or veils. [8] There is however no specific mention whatsoever in literature (Google Books search) of neroli being aphrodisiac prior to 1998. This is slightly unusual: Almost without exception, herbal and plant based aphrodisiacs and aphrodisiac essential oils have an ancient legacy as such. Then, it starts to appear. Better Nutrition magazine of March 1999 has a feature article on Neroli, which states that Neroli is said to possess aphrodisiac qualities. Now, thousands of popular web sites now cheerfully include Neroli in their lists of "top aphrodisiac essential oils" - in many cases without reference or apparent verification of sources. A search of Pubmed shows that no scientific research appears on the subject of whether Neroli is an aphrodisiac. The closest thing I could find to a scientific article investigating the scent of Neroli in this regard (and this is really not all that close) was a 2003 paper from the Department of Ecology and Evolutionary Biology, University of Connecticut, USA; which found that the crested auklet (Aethia cristatella), a seabird, exhibits a distinctive tangerine-like scent closely associated with courtship. [9] It might be an interesting study for the research chemist to investigate whether there is some form of connection.

Citrus aurantium is listed in the AHPA's "Herbs of Commerce", p.40 - and Neroli essential oil is available from usual sources. Please use care, follow safe practices and safety precautions when using essential oils. [10]

Several essential oils are made from the various types (and parts) of citrus trees - and it is easy to get confused: Here is a handy chart of some of the most common citrus oils:

Aditional safety note - it is specifically advised not to use citrus essential oils on the skin (especially bergamot) - as they may trigger sensitization reactions.

In a 2011 study, 86 molecular components were determined. Composition of the oils was found to be somewhat variable depending on the time of year that they were produced. [13]

A 2012 study reported that the main components of Tunisian neroli oil were as follows:

One of the major components of neroli is nerol - a component with extensive use in the perfume industry. It is often used in the preparation of synthetic rose scents. [19]

Around 90% of the world's production of Neroli comes from Tunisia and Morocco - at around 1500 Kg. A small amount of neroli (up to 150kg) is also produced in Egypt, Spain and Morocco, France and Spain. The Tunisian oil is reported to have always been considered to be the finest - and is the most expensive. [13][18]

Neroli has an intriguing history of use spaning many centuries. The essential oil Neroli is said to gain its name from the fact that it was used by Anne Marie Orsini, the princess of Nerola, Italy - who is believed to have introduced the fragrance to fashionable use. She added it to her bath and used it to perfume her gloves. [1] Anne Marie Orsini, also known as Madame de Orsins, was an influential and ambitious political figure in the French and Spanish royal courts and lived from 1642 to 1722. [20]

By 1750 Neroli appears in various encyclopedias and scientific books, particularly in French. It is described as having a pleasing fragrance. In the 1755 Chimie Médicinale of Paul Jacques Malouin, neroli is described as being the essential oil of orange flowers, good for conditions of the nerves; however no specific mention is made of bitter orange, Citrus Aurantium. [21]

This is typical of the writers of the period; and even in the 19th century we find no mention of Bitter Orange - although some writers mention Seville Orange (another name for bitter orange). Similarly, the 1735 Histoire générale des drogues simples et composeés of Pierre Pomet, makes no mention of which variety of orange blossom was used to make the oil:

"Those who distil the Orange Blossom, draw a clear and extremely fragrant oil, which perfumers gave the name Neroli, of which the most perfect is made in Rome, and after that in Provence."

It seems that the use of Citrus aurantium, as opposed to orange flowers in general, may be a more modern invention or simply that there was more ambiguity as to the species used in old time. The text speaks of Neroli as if it is no modern invention - and gives no indication of the origins of the oil in perfumery.

Digging deeper... Gilles Menage's 1694 work Dictionnaire etymologique ou Origines de la langue françoise (Etymological dictionary of the origins of the French language) states that Gloves of Neroli are "a type of perfumed glove, named after the Princess of Neroli, also known as the Duchess of Bracciano, who was the first to so perfume them." This work copies the entry on Neroli from Menage's Italian etymological dictionary of 1685.

Both these editions borrow from an earlier work of Menage: the 1672 Observations sur la langue françoise, which has an entry amusingly entitled Whether one should say 'Gloves of Neroli' or 'Gloves of Nerola'. It goes on to state (translated from the French):

"One should say 'Gloves of Neroli'. This is what the gloves are called in France; whereas in Italy, from whence they originated, one calls them guanti de Nerola after the Princess of Nerola, now the Duchesse de Braciane, who invented the perfume. The Italians have similarly named 'gloves of Frangipani' the gloves of which the perfume was invented by the Marquis of Frangipane."

The practice of adding perfume to gloves itself, clearly was not invented by Orsini, but the naming of the essential oil of orange flowers "Neroli" in her honour appears to be validated. Gilles Ménage had already described Gands de Frangipani - gloves perfumed with Frangipani - in his 1650 Les Origines de la Langue Françoise.

The use of orange flowers in perfumery and medicine, however, is older. Eau de fleurs d'orange (orange flower water) is mentioned at least as far back as 1648 - being one of several floral waters in use in those days. [22] Many of the earlier texts being in Latin, it is not too much of a stretch to imagine that similar creations were used by the Ancient Romans, Arabs, Greeks or even Egyptians.

The solution seems obvious: Anne Marie Orsini most likely did not "invent" the Neroli oil, but popularized its used among the European aristocracy. Its use may even go back to ancient times.