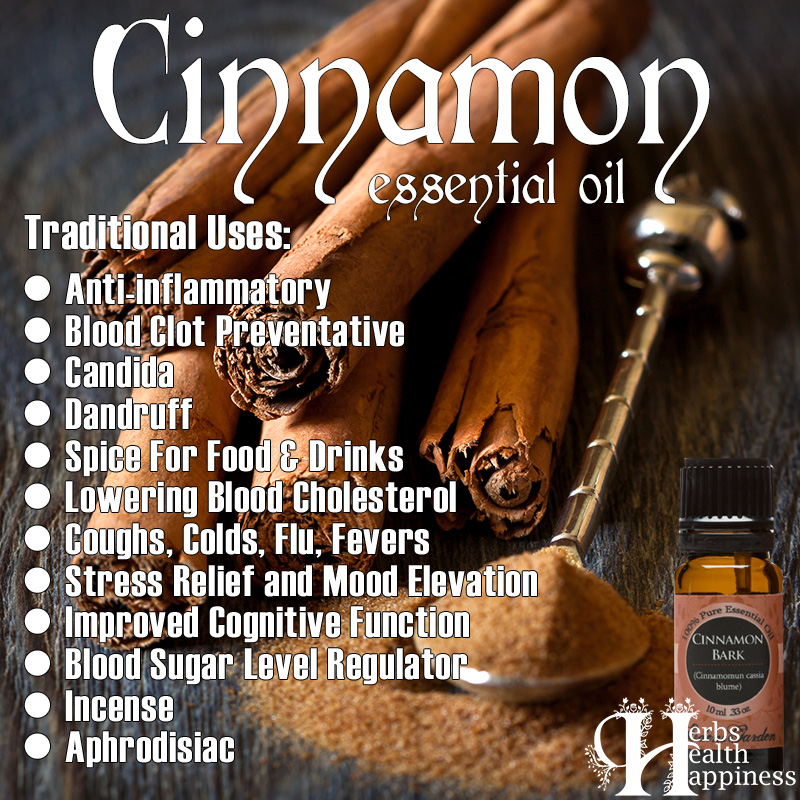 Cinnamon is the name given to an evergreen shrub native to Sri Lanka, and to the spice which is derived from it bark. Cinnamon is famous throughout the world as a spice, and has been in use since ancient times.

Cinnamon was so prized by the ancients that medieval spice traders delivering Cinnamon to the countries of the Mediterranean, kept its source secret in order to monopolize the supply. Cinnamon has been used for hundreds of years as a spice and flavoring in innumerable savoury and sweet dishes, and in beverages - and is said to be one of the "secret ingredients" in the famous Coca Cola recipe. Evidence of Cinnamon's popularity in ancient times can be observed in the Bible's Old Testament, where it is mentioned many times. [1]

The Cinnamon plant has white flowers, and Cinnamon spice with a paler color is considered to be of better quality. This is because paler bark comes from younger parts of the plant. [2] Cinnamon is usually sold in the form of sticks (which are rolled up strips of bark) or ground into powder - however the sticks are often considered superior because cinnamon in powdered form loses its aroma more rapidly.

True Cinnamon (Cinnamonum zeylanicum or Cinnamonum verum) is often confused with Cassia (Latin name Cinnamonum aromaticum or Cinnamonum cassia, also known as Chinese Cinnamon or bastard Cinnamon) which though similar, has its own pungent aroma. [2] It's said that some 80% of the cinnamon sold in the U.S.A. today is actually Indonesian cassia.

True cinnamon's complex aroma comes from a combination of cinnemaldehyde, which comprises 65-75% of oil of true cinnamon bark; and other components such as eugenol (the major component of essential oil of cloves), cineole (also found in Basil, Sage, Cardamom and other herbs) and linalool (a major component of Lavender and Cilantro essential oils). It's worth noting that oil of cassia bark has a much higher amount of cinnemaldehyde (75-90%) [3] but only a trace amount of eugenol. Cassia essential oil also contains 7% coumarin, a substance over which there have been health concerns and a legal safety limit, whereas true Cinnamon only contains 0.6% coumarin. [4][5]

Cinnamon has been in use since ancient times in herbalism - and amongst other things, has been indicated by herbalists for catarrh, as a rubefacient (to increase blood flow at the skin's surface when applied and draw inflammation out from deeper areas), as a stimulant, astringent, and to "warm the organs". It has also been used for urinary tract infections and vaginal yeast infections. Half a spoonful of cinnamon powder mixed into a drink such as tea is considered to be a remedy for diarrhea. [6][2]

In a study at the University of Copenhagen, arthritis patients given a dose of half a teaspoon of Cinnamon powder with honey every morning, showed significant improvement and walked without pain within a month. [7]

Cinnamon essential oil is a strong bactericide [2] and has been used on the skin to combat the infection of scrapes.

Cinnamon has also been investigated in weight loss studies and studies have shown some possible use in treatment of Type 2 diabetes. [8][9]

Cinnamon's scent has also been shown in studies to boost brain activity and cognitive function. In a 2004 study presented at the annual meeting of the Association for Chemoreception Sciences, in Sarasota, FL, cinnamon emerged as a clear winner in human tests which also included peppermint and jasmine. [10]

Cinnamon has nutritional value - and is considered and excellent source of manganese. [10]

Cinnamon has one of the longest histories of any spice. Used widely in India and Asia, and imported to the Western world, it began to be used (medicinally at first) by the Greeks and Romans in around 300-400 AD, and was believed by them to be an aphrodisiac. It was even burned by Egyptians and Romans in funerary rites.

From mediaeval times, popularity of Cinnamon spread throughout western Europe and by 1500 powerful trading organizations fought for control of the Cinnamon trade. At this time, only wild harvested Cinnamon was shipped, and due to high demand, prices and of course greed, Cinnamon bark was overharvested to the point where there was concern that supplies would be exhausted. However it was discovered by the Dutch that Cinnamon could be grown in plantations, and that in 8 years a plant produced a usable crop. The Dutch went on to control the Cinnamon empire until the British landed in Ceylon in 1796 and created their own Cinnamon plantations. [2] 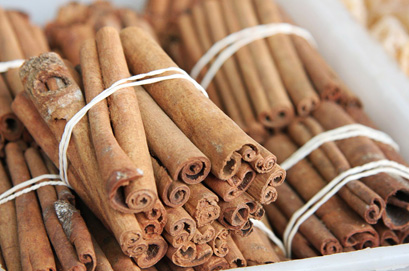 The bark of cinnamon alone possesses 0.5-1.0% of volatile oil, 1.2% of tannins, mucilage, calcium oxalate, starch, and mannitol, the volatile oil being the active constituent. Cinnamon essential oil contains 60-70% of cinnamaldehyde, 5-10 % of eugenol, benzaldehyde, cuminaldehyde, and other terpenes, including phellandre, pinene, and caryophyllene. [4] However, it has been shown that a clear difference in terms of composition of essential oil exists among cinnamon species. For example, although cinnamaldehyde is the most common major volatile constituent of each species, the leaves of Cinnamomum cassia also contain 3-methoxy-1,2-propanediol as the chief volatile compound, the leaves of C. zeylanicumand, C. pauciflorum, and C. burmannii have eugenol, whereas the leaves of C. tamala have 5-(2-propenyl)-1,3-benzodioxole. [11]

Is Cinnamon an Aphrodisiac?

The scent of Cinnamon has a long tradition of lore regarding its use as an aphrodisiac. Our first indication that Cinnamon fragrance may have some aphrodisiac quality, comes from the book of Proverbs in the Bible, where together with myrrh and aloe, it was used to "perfume the lovers' bed". Yet this is not the only mention of Cinnamon from ancient times in this regard: An attar (essential oil or oil blend) of Cinnamon was said to have been used by Queen of Sheba in her seduction of King Solomon, at around 950 B.C. In ancient times, the use of such spices was reserved for nobility / royalty. [2] They were rare, costly, and thus considered all the more exotic.

Cinnamon has been used in other ways to create aphrodisiac effects: a drop of Cinnamon oil rubbed into the genitals has been used to produce sexual stimulation. [22] (note - this may not be safe and is not advised. It is not said by the source whether the oil is used diluted or not, but numerous other sources advise against using essential oils undiluted on the skin. As an example, one source suggests that no more than half a drop of oil of cinnamon should be used in a bath. [23])

Often, it appears that items that are rare and exotic, acquire a reputation for being aphrodisiac. It might even be that exotic rarity itself has some quasi-aphrodisiac effect, or that the marketing of exotic items is achieved by overplaying their sensual qualities. However, Cinnamon has been used in perfumery for thousands of years and the long standing use of a scent in perfumery is a strong indicator of possible aphrodisiac qualities of the aroma: It is as if their allure has been "road tested" for centuries.

In the case of Cinnamon, some interesting scientific studies have shown that there may be some real aphrodisiac action in its scent. The most famous study of Cinnamon in connection with sexuality is that of Dr. Alan R. Hirsch, Neurologist and Psychiatrist, Director of Chicago's Smell and Taste Treatment and Research Foundation, and writer of several books. Hirsch, in a renowned 1994 study of the effect of aromas, found that men became most sexually aroused (as measured by penile blood flow) by the aroma of Cinnamon buns! So the ancient aphrodisiac aroma of the Queen of Sheba may yet prove to have some validity: However, it's interesting (and rather amusing) to note that in Hirsch's 1995 follow up study on 31 males between the ages of 18 and 64, other scents which increased male arousal included cheese pizza, buttered popcorn, and (the winner) a mixture of lavender and pumpkin pie. [24]