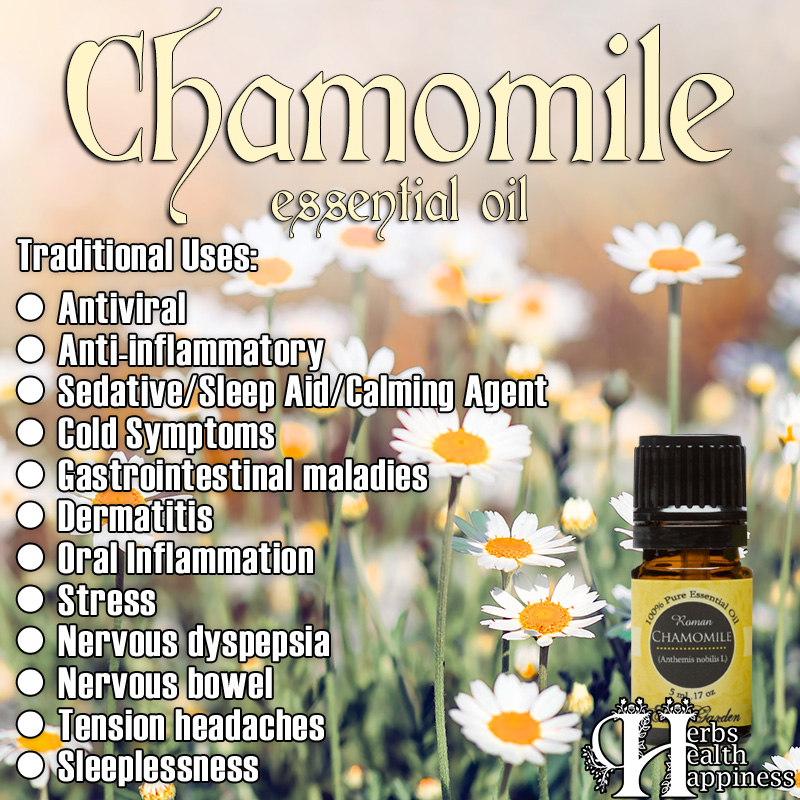 A member of the daisy family Asteraceae and a native of eastern and southern Europe and temperate Asia, chamomile (alternate spelling: Camomile) is one of the most widely used and documented herbs in the world. Because of the various terpenoids and flavonoids present in its flowers, the plant has been well researched over the years for its therapeutic, cosmetic, and nutritional uses. Two varieties of chamomile exist: the German chamomile (Matricaria chamomilla or M. recutita), the most commonly used one, and the Roman or English chamomile (Chamaemelum nobile). [1]

Inasmuch as there are numerous health benefits chamomile has been evidenced to possess, one can avail of this herb's medicinal properties through its broad array of health-care preparations, the tea and infusion from chamomile probably being the most widely consumed. Chamomile essential oil soothes the senses, relieves nervousness as well as pain in aching muscles and joints, and alleviates general depression once inhaled or used in aromatherapy. [2]

Chamomile essential oil is widely utilized in the food, perfumery, and cosmetic industries, but its most-appreciated benefits lie on its pharmaceutical properties, which have been exploited for centuries to provide remedy to various conditions such as gastrointestinal maladies, dermatitis, and oral inflammation. [1] The Roman chamomile essential oil is widely utilized as a comforting treatment for symptoms related to stress, [3] whereas the German chamomile essential oil has a decades-long history of being used as a traditional remedy for nervous dyspepsia, nervous bowel, tension headaches, and sleeplessness. [4]

Although chamomile essential oil is generally considered non-irritant and safe and no known toxicity has been declared for its use, reports of allergic reactions in individuals who have been exposed to chamomile essential oil exist. Allergy symptoms, such as skin rashes, throat swelling, and shortness of breath, can possibly result from chamomile use by those with ragweed, marigold, and daisy allergies. Coumarin also exists in chamomile, which can produce drug interactions with blood thinners. As with other essential oils, it should not be taken internally, and dilution is advised.

Chamomile as antiviral: A 2008 German study considered chamomile essential oil as a promising virucidal agent for topical therapeutic application against genital herpes, an infection caused by the herpes simplex virus. In this study, chamomile essential oil displayed high selectivity index and an outstanding inhibitory effect against herpes simplex virus type 2 (HSV-2) in vitro, with an inhibitory concentration (IC50) of 0.003%. [6] Another German study in 2008 supported this finding and demonstrated that chamomile essential oil interrupts the adsorption of herpesviruses and displays high levels of antiviral activity against HSV strains sensitive to aciclovir (a well-known antiviral drug for the treatment of herpes simplex virus infections) and clinical HSV isolates resistant to aciclovir. [7]

Chamomile as anti-inflammatory: Chamomile essential oil contains a number of compounds with anti-inflammatory properties such as a-bisabolol. These compounds can penetrate below the skin surface into the deeper dermal layers to exert their anti-inflammatory effects. In a 2009 study, chamomile was shown to inhibit the activity of cyclooxygenase (COX-2) enzyme, an enzyme involved in the process of inflammation and carcinogenesis, and in turn inhibit the release of prostaglandin E(2) in macrophages. [8]

Chamomile as sedative / sleep aid / calming agent: Several studies demonstrate the efficacy of aromatherapies using chamomile essential oil for the treatment of insomnia and the induction of sedation, which is related to chamomile's apigenin, a flavonoid that binds to benzodiazepine receptors in the brain. Other compounds found in chamomile extracts are known to bind to GABA receptors in the brain and may be responsible for chamomile's calming and sedating effect. In one study, inhalation of vapors of chamomile essential oil was shown to reduce the increase in adrenocorticotropic hormone levels associated with stress. [2]

Chamomile vs. cold symptoms: Steam inhalation using chamomile extract has been attested to relieve common cold symptoms, although more evidences from research need to be accumulated to confirm this. [9]

According to a 2012 Japanese study, chamomile exerts an effect similar to that of central nervous system stimulants. [10]

Chamomile flowers owe their therapeutic uses to a broad variety of bioactive constituents. Chamomiles consist of 0.24%-1.9% volatile oil, which, when exposed to steam distillation, ranges in color from bright blue to deep green when fresh. [2] Among the most important of these constituents are a-bisabolol and its oxide azulenes. α-Bisabolol is a colorless oil with anti-irritant, anti-inflammatory, and antimicrobial effects. Recent evidence also points out its anticancer effects; it has been demonstrated that α-bisabolol selectively kills transformed cells derived from malignant tumors through apoptosis. [11] In particular, α-bisabolol was found to be an effective proapoptotic agent for primary human acute leukemia cells that does not harm normal blood and bone marrow cells. [12]

Aside from α-bisabolol, chamomile contains numerous phenolic compounds such as apigenin, quercetin, and patuletin. Apigenin is of note for its possible chemopreventive function due to its autophagy-inducing property in leukemia cells and its kidney-protective role against cyclosporine-associated kidney damage. [13] Quercetin on the other hand is a flavonoid with bronchodilating (i.e., bronchial tube-widening) and anti-inflammatory properties; it is also known to reduce blood pressure among hypertensive and obese patients and provides promising symptomatic relief for patients with prostatitis and fibromyalgia. [14] Other mention-worthy chemical compounds present in chamomile include chamazulene, farnesene and α-pinene, sesquiterpene lactones (mainly nobilin and 3-epinobilin), glycosides, hydroxycoumarins, coumarins (herniarin and umbelliferone), terpenoids, and mucilage. [2]