The calendula is a popular flowering plant of the daisy family. It is also commonly known as marigold - however Calendula is a distinct genus all its own, with as much as twenty distinct species displaying either perennial or annual traits; and should not be confused with other plants that are referred to as 'marigolds'.

Thought to be a native of the Mediterranean, calendula is also found in several parts of Macronesia, India, Arabia, and Asia, although it is most popular in European areas, especially in places where Grecian or Roman influence is strong. Calendula is characterized by its herbaceous appearance, and sports an iconic yellow-hued blossom that resembles a sunburst. The flowers come in varied shades of yellow, with everything from yellow-gold, dun-yellow and bright-yellow colours being common. The petals of the blossoms vary, with some species showing as much as twenty or more petals. The base of the plant itself is shrub-like and reaches no more than thirty inches tall, with hairy leaves that often display a ‘toothed’ or sharpened appearance on the tips and edges. Calendulas also sport fruits that possess thorny exterior skins, and are notable for their curved ‘tooth-like’ appearance. [1] The seeds are likewise curved and thorny.

Calendula has a long-standing reputation for being a medicinal plant, with usage dating back to the time of the Early Greeks. Despite being prescribed Mediterranean origins, the use of calendula as an herbal medicine may also be found in Traditional Chinese Medicine and Ayurveda, although its present popularity does indeed seem to stem from the medicinal properties attributed to it by the Greeks, and later, by the Romans. Calendula may also be used as a foodstuff, typically as an accompaniment to salads, although the culinary use of calendula has declined as of late, with preferences veering towards a markedly medicinally-inclined purpose. Despite its popularity during ancient times, and up until the latter part of the 19th century, nowadays, the use of calendula has declined, typically being used by those with a pre-established interest in alternative medicine.

Nowadays, the most common use of calendula is as an ornamental plant, typically planted in pots or in small garden hedges. In earlier times however, calendula served various purposes and was initially considered indispensable in the kitchen, where it was typically grown in tiny pots, to be used fresh whenever needed, earning it the name of ‘pot marigold’. It was employed as a garnish, and as a type of culinary herb both for salads and light soups, although this practice fell into disuse during the early 20th century. Nowadays, the petals of the calendula are commonly employed in the making of tisanes, typically in its fresh form, although pre-packaged tea bags or loose dried calendula petals may also be employed in its creation. Tisanes made from calendula petals have long been ascribed tonifying, detoxifying, and emmenagogue properties and is commonly drunk to help relieve menstrual cramps, or (in stronger concentrations) to encourage regular menstruation. [2] 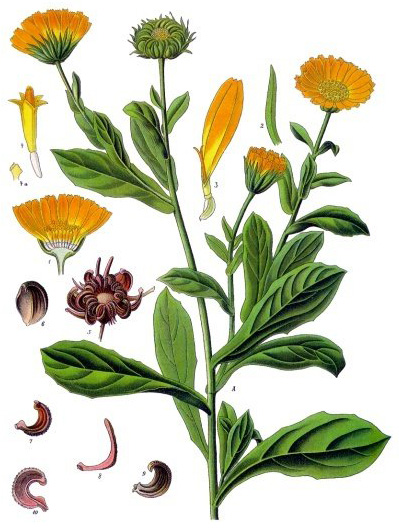 It has long been prescribed for everything from erratic periods, wound disinfection, bladder cleansing, and organ tonifying. A very strong decoction of calendula tea may even be useful in preventing sepsis and infection, while at the same time encouraging the repair and recovery of damaged or diseased skin. Because of its rejuvenating and antifungal properties, calendula tea may be used as a topical hair, face, or skin rinse to help stave off dandruff, wrinkling, and minor fungal infections.

When employed as a hair-rinse, it makes for the perfect natural hair-lightener (for blondes and brunettes), especially when combined with honey and applied religiously for three days to a week at the most. [3] Potent decoctions of the petals may also be employed as an all-natural alternative to chemical-based feminine washes or douches, as it provides ample antimicrobial actions, without being harsh enough to interfere with the natural flora of the female organ. This mild decoction may even be employed as a remedy for ear and eye infections when used as a topical rinse over the affected areas.

When mixed with honey and ginger and allowed to infuse for up to a month, it makes for an excellent syrup for mild coughs and sore throat as well as a great healing salve for cuts, burns, and fungal infections. Calendula petals may even be powdered, encapsulated, and taken orally as a food supplement. Despite the commonality of this practice, it is ill-advised, as prolonged consumption of calendula in extremely large dosages may have detrimental side-effects. Allowed to infused in a base oil of one’s choosing, it is said to be useful for relieving discomforts brought about by rheumatism, lumbago, colic, and arthritis when applied topically to the affected area, although it is perhaps more potent if combined with a spice or herb possessing a warming or cooling nature, as calendula ointments by itself alone simply provides minor anti-inflammatory effects. [4] Calendula petals may even be made into tinctures, and is employed as a remedy for much of the same ailments it treats in its decocted or infused form, albeit the tincture of calendula is of a far more concentrated nature than any other preparation, and thus must be used sparingly.

While calendula petals have been used in the past as an organic dye which yielded a pale-yellow to yellow-orange hue depending on the concentration, the most popular (and well-known) use of calendula petals is in the creation of calendula oil. Unlike other oils however, calendula oil is not in the truest sense of the word an essential oil, but is rather a very strong macerated infusion of fresh calendula petals in a base oil of one’s choosing. The maceration process imbues the base oil with the properties found in the calendula petals, making it a perfect healing oil for cuts, burns, bruises, warts, and general aches and pains. Calendula oil is known for its potent antibacterial, antifungal, anti-inflammatory, and antiseptic properties and is a must-have in every first-aid kit. [5] It is also among the easiest-to-make of all medicinal oils, requiring very little fuss during preparation.

The leaves of the calendula also possess some degree of medicinal use, although it is far more limited than that of the flowers. The leaves may be consumed as a type of salad greens while yet young, and has been traditionally prescribed as a remedy for scrofula in Western folkloric medicine. The juice extracted from the macerated leaves have also been said to be a potent remedy against warts and boils, and either poultices or the extracted juices of the calendula’s leaves have been prescribed for the treatment of warts, usually as no more than a folk remedy of dubious efficiency. [6]

While calendula appears to lack any distinct detrimental side-effects, one should nevertheless err on the side of caution when taking calendula orally, regardless of the method employed. Occasional individuals have allergic reactions to calendula.

Pregnant and lactating women should refrain from taking calendula tea or supplements containing calendula for the duration of their gestational term until well into the end of their lactating phase as it may cause unwanted side-effects such as accidental miscarriage (in pregnant women) due to its emmenagogic properties, or a change in the constitution of breast milk in the case of lactating mothers.

Calendula features strongly in old "folk magick" and hearthcraft where it was traditionally considered a powerful protective herb. Garlands or boquets of calendula are usually hung upon doorways and rafters to prevent any form of evil from entering the abode. Typically associated with the properties of Fire and the Sun, calendula oil may help to increase the potency of amulets or talismans if employed in consecration, while its petals made into a sachet and stashed beneath a pillow are said to bring about prophetic dreams. The seeds of the calendula are typically associated with protective properties sympathetic to fire elementals.

When carried in a mojo bag or a medicine pouch, it is said to help in all legal matters, especially if carried into a courtroom during a hearing. Bathing in water infused with calendula is said to help improve one’s charisma and charms, and may have been employed to this effect by leaders or individuals who wished to obtain dominant or powerful roles in their respective fields. [7] .

Names of Calendula, Past and Present