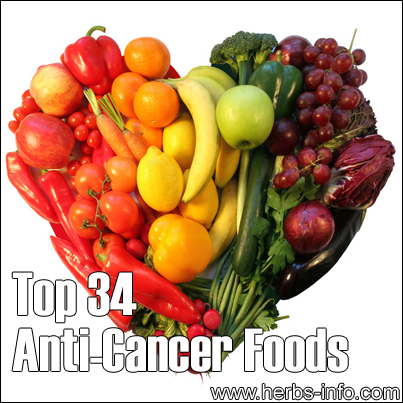 (Note - this list originally appeared as part of the Anticancer Herbs page on this site - but due to the significant size of the page, we decided to divide them into two pages, one for "herbs" and one for "foods". Please see the introduction to that page for an explanation of the goal of these pages and help with the technical terms used. Also, note that spices such as turmeric appear on the "herbs" page. )

Please note - the purpose of this page is not to attempt to persuade you that "these foods will cure you of cancer". We are not making any medicinal claims here! It is important to understand this. The foods listed here have been indicated by various researches to have some preventative / protective or direct cytotoxic effect against cancer cells, usually in in vitro lab tests. However there is a lot more work to do by our good people of science before these can in general be considered "proven" to counteract cancer in humans - though these are most definitely some healthy foods and widely considered beneficial to health!

The purpose of this page is simply to present as much information as possible on the subject, in order that the person interested in the possibility of anti-cancer foods may be assisted in "doing their homework". See this page as a "starting point" for research or investigation. I've cited all references that I have found. A disclaimer is written in the small print at the foot of this page in greater detail, but it is expedient to repeat it: This page is not medical advice, nor is it intended to substitute for professional medical consultation.

Studies have found antiproliferative and apoptosis effects of avocado on oral, prostate and other cancer cells. http://www.ncbi.nlm.nih.gov/pubmed?term=avocado%20cancer

Anthocyanins are molecules belonging to the flavonoid class, and are pigments appearing red, purple or blue. These substances are found in plant tissues, particularly in red, blue, purple or black fruits. http://en.wikipedia.org/wiki/Anthocyanin Berries such as blueberry, bilberry, cranberry, elderberry, raspberry and strawberry are anthocyanin rich and have been found by researchers to have anti-carcinogenic effects: http://www.ncbi.nlm.nih.gov/pubmed/14972022

Much research has bene done in this field - list of papers here - http://www.ncbi.nlm.nih.gov/pubmed?term=cancer%20anthocyanins

To the right is a list of some of the foods with the highest anthocyanin content: (sourced from http://en.wikipedia.org/wiki/Anthocyanin)

Although named after carrots, beta-carotene also occurs in a number of other fruits and vegetables. It is a red-orange pigment and is the substance that colors the carrots orange. Beta-carotene is a precursor to vitamin A in the body. Source - http://en.wikipedia.org/wiki/Beta-Carotene

Beta-carotene is reported to have cancer preventative and tumor necrosis properties. Source - http://www.askdrsears.com/topics/family-nutrition/anticancer/12-dietary-changes-will-lower-your-cancer-risk Studies have shown that carotenoids possess the capacity for scavenging of DNA-damaging free radicals, suppression of angiogenesis, inhibition of cell proliferation and apoptosis induction. Source - http://www.ncbi.nlm.nih.gov/pubmed/21466428 Much more here - http://www.ncbi.nlm.nih.gov/pubmed?term=%22beta%20carotene%22%20cancer

Note - excessive consumption of Beta-carotene, particularly associated with supplementation / use as a food coloring, has possible adverse health effects and excess beta-carotene, once stored in the liver, cannot be converted by the body to vitamin A. In particular, excessive beta-carotene is linked to increased lung cancer risk in smokers. Source - http://en.wikipedia.org/wiki/Beta-Carotene

Some good news for coffee drinkers - in a 2011 study, caffeic acid, found in not only coffee but also olive oil and some fruits and vegetables, has been discovered to have a "potent anticancer effect" on the HT-1080 human fibrosarcoma cell line. http://www.ncbi.nlm.nih.gov/pubmed/21116690

In other research, consumption of cruciferous vegetables has been associated with reduced cardiovascular disease. Source - http://www.ncbi.nlm.nih.gov/pubmed/21593509

Fish containing eicosapentaenoic acid have correlated with reduced cancer risk. This effect has been found to be increased in combination with lycopene (see tomatoes). http://www.ncbi.nlm.nih.gov/pubmed/18708285

In a study of 35,239 male residents of Washington state aged 50-76, use of grapeseed supplements was associated with a 41% reduced risk of prostate cancer. http://www.ncbi.nlm.nih.gov/pubmed/21598177

Important note - mushrooms should only be wild harvested by true experts who can identify toxic species accurately!

Although some consider soy controversial, it has been claimed that Japanese women whose diets contain much soy are four times less likely to die of breast cancer than American women. Even among the Japanese, those who eat the most soy get the least cancer. Source - http://www.askdrsears.com/topics/family-nutrition/anticancer/12-dietary-changes-will-lower-your-cancer-risk The article referenced also suggests to eat more whole-soy products and not to rely on processed soy products such as soy burgers, soy sauce, and soy beverages.

Soy contains isoflavones and these have been found to induce apoptosis (cell death) in cancer cells in lab tests. Much research here - http://www.ncbi.nlm.nih.gov/pubmed?term=soy%20anticancer

The isoflavone in soy that is reported to have the greatest anticancer properties is genistein. Soy flakes, soy nuts, soy flour and roasted soybeans have the highest content of genistein, with soy milk, soy burgers and tofu having the least. Source - http://www.askdrsears.com/topics/family-nutrition/anticancer/12-dietary-changes-will-lower-your-cancer-risk

Not tapioca itself, but the plant from which it is made, was the subject of some interesting research which I thought worthy of mention. Genetic material from the plant was used to create a treatment that killed a brain tumor in vivo: http://news.bbc.co.uk/2/hi/health/317467.stm

Tea contains Polyphenols, which have been the focus of much interest from anticancer research studies. Green, black, white and other teas are all made from the plant Camellia sinensis, but are created by different post-harvest processes and have widely differing polyphenol content. http://www.ncbi.nlm.nih.gov/pubmed/21538852 Enzymatic oxidation causes the tea to darken. http://en.wikipedia.org/wiki/Tea

Catechins found in green teahave been found to " possess remarkable therapeutic potential against various types of human cancer cells in vitro and in vivo models". http://www.ncbi.nlm.nih.gov/pubmed/21725973 Much research has been done in this field - 1,470 search results on Pubmed - http://www.ncbi.nlm.nih.gov/pubmed?term=%22green%20tea%22%20cancer

Lycopene, a substance found in tomatoes, is considered an antioxidant. It has also been found to have some anticancer activity. A number of papers on this - http://www.ncbi.nlm.nih.gov/pubmed?term=lycopene%20anticancer Interestingly, it is reported that oils must be consumed with the tomato for proper absorption. This has been seen as a vindication of the "mediterranean diet" - itself a subject of anticancer research. http://www.ncbi.nlm.nih.gov/pubmed/15482626

Something of an obscure one, this. As far as I can ascertain, Wu Xing Soup (difficult to find information on it) means "five flavors" soup. Wuxing / Wu Xing is the Chinese name for the Taoist system of five elements (wood, fire, earth, metal, water) - but is also the name for a region, so I am not sure of the connotation. According to http://www.dictall.com/indu/064/0633511167E.htm Wuxing soup is "made of burdock, white radish, carrot, dry mushroom and the leaves of white radish", and has a legend of antitumor effect in folk medicine.

"The anti-tumour effect of Wuxing soup and its mechanism in inducing apoptosis of tumour cells mediated by calcium" - http://www.ncbi.nlm.nih.gov/pubmed/19180961

"The anti-tumour effect of Wuxing soup and its effect on the immunity of melanoma mice" - http://medicine-hygiene.idnwhois.org/download.php?aid=83211