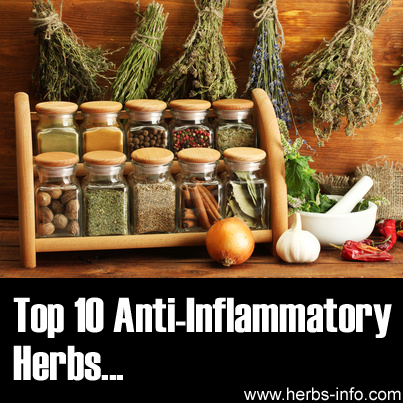 Characterized by redness, swelling, and pain, inflammation is the body's autoimmune response to harmful or threatening stimuli. Inflammation is likely to occur when the body comes into contact with toxins, allergens, and microorganisms, many of which are a normal part of everyday life; as a result, most people experience mild inflammation from time to time. When inflammation becomes more frequent than normal, the body is at risk for chronic inflammation which may result in tissue damage.

To reduce the risk of tissue damage, experts recommend that sufferers of chronic inflammation seek medical care or advice. While prescription medications are commonly used for inflammatory conditions, a number of options exist for those who prefer natural treatments. Alternative and complimentary treatments include dietary and lifestyle changes, homeopathic remedies, herbs and supplements. Studies have shown that certain herbs--such as those described below-- may help to treat a range of inflammatory disorders, including rheumatoid arthritis.

Here, then, in no particular order is our list of herbs considered beneficial for inflammation:

Closely related to ginger, turmeric has a history of use in Indian cuisine and Ayurveda (traditional Indian medicine). Native to tropical regions of southern Asia, turmeric has been utilized by industrialized western societies as a coloring agent in cheeses, baked goods and dairy products; and packaged foods such as popcorn, sauces, canned foods, cake mixes and icings, and cereals. One particularly notable example is mustard--turmeric is responsible for its yellow color. Mentioned by the ancients as having medicinal properties, turmeric is used today by practitioners of naturopathic medicine as remedy for inflammatory conditions such as arthritis, tendonitis, and auto-immune conditions. [1] Turmeric's active constituent curcumin (a volatile oil) is responsible for its anti-inflammatory effect, and has been studied scientifically in recent years regarding its potential to be used in place of (or in addition to) pharmaceutical drug therapies. [2] Results from a 2006 study indicate that turmeric may inhibit the progression of inflammatory conditions such as rheumatoid arthritis. [3]

Indigenous to India (where it is called tulsi) holy basil has a history of use in the Ayurvedic tradition as a treatment for inflammatory conditions. Still used today by Ayurvedic practitioners and naturopaths, holy basil has been of scientific interest in recent years for its potential to treat various conditions including inflammatory disorders. [4] Results from animal studies indicate that holy basil can help to combat and prevent inflammation, and might be effectively used as a natural alternative to over-the-counter painkiller drugs. In a 2005 study, researchers determined that extract of holy basil acts as a lipoxygenase inhibitor-- in other words, its high antioxidant activity may have an anti-inflammatory effect. [5]

Used as a cooking spice in traditional dishes of various cultures, nutmeg is the seed of an evergreen tree native to the Spice Islands of Indonesia. [6] Recognized for centuries by indigenous healers and herbalists as having medicinal value, nutmeg has recently entered the realm of scientific interest for its potential to treat inflammatory conditions such as rheumatoid arthritis. As described in an article published in 1999, researchers in Nigeria found nutmeg extract to inhibit swelling in rats. [7] In vitro experimentation has resulted in data that supports findings from animal testing-- one notable example is a 2010 study in which nutmeg was found to enhance the body's ability to fight inflammation and prevent against associated health problems. [8] Nutmeg is also thought to alleviate muscle and joint pain associated with inflammation.

Also known as mukul myrrh tree, the guggul tree is native to India and has a history of use in traditional Indian medicine. The healing properties of guggul are found in the resin, as opposed to the bark or leaves-- in Ayurveda, the resin or “gum” is collected and the active components are extracted, leaving the practitioner with a highly potent medicine--the steroid guggulsterone in modern medical terms. Traditionally used by Ayurvedic practitioners to cleanse the body of toxins, guggul has recently entered the realm of modern medical interest. According to the National Institute of Health, guggul contains pharacologically-active components that are effective in treating various conditions on a biological and molecular level. [9] Researchers have determined via in-vivo testing that the guggulsterones present in guggul extract have an anti- inflammatory effect, and results from clinical trials have validated that isolated guggulsterones are safe for use in pharmaceutical medications for treating rheumatoid arthritis and osteoarthritis. [10]

Used for centuries in the Ayurvedic tradition, tropical rose mallow has recently been of scientific and medical interest. Studies show that gossypin--an active constituent found in the root of the plant--may significantly reduce inflammation and fluid retention. [10] In 2003, researchers in India used a animal model to determined that the high antioxidant activity of gossypin was effective against free radicals [11] , and in 2007 it was found to slow the growth of inflammation- associated cancer by inhibiting the activation of of NF-kappaB. [12] In terms of treating inflammation, the effect of gossypin are reported to be similar to that of phenylbutazone--a synthetic non-steroid anti-inﬂammatory agent. Results from in vivo experimentation indicate that when compared to phenylbutazone, gossypin is a slightly less effective but much safer option. [13]

Indigenous to amazon regions of Ecuador, Peru and Colombia, cat's claw has a history of use in traditional medicinal systems of early South American cultures as a treatment for inﬂammatory conditions. [14] Cat's claw is considered relieve gastritis (stomach inﬂammation), inﬂammation associated with menstruation, and skin inﬂammation caused by acne. Results from vitro experimentation indicate that cat's claw contains potent alkaloids which protect the body against damage from free-radicals. Small-scale clinical trials have revealed that cat's claw may be useful in treating osteoarthritis and rheumatoid arthritis. [15] A popular home remedy, cat's claw can be purchased from a number of natural-foods markets and is widely available from online herb retailers.

Garlic has been found by numerous recent lab studies to have all manner of beneficial effects. It is considered anti-inflammatory. Example: In a 2011 study, Garlic and onion attenuated vascular inflammation and oxidative stress in fructose-fed rats. [16] More studies: http://www.ncbi.nlm.nih.gov/pubmed/?term=garlic+inflammation

According to a 2011 review, ginger is one of the anti-inflammatory spices which may play a role in the lower incidence of certain neurodegenerative diseases among people living in the Asian subcontinent. The review states that "chronic inflammation plays a major role in the development of various neurodegenerative diseases, including Alzheimer's disease, Parkinson's disease, multiple sclerosis, brain tumor, and meningitis" - and that "nutraceuticals derived from such spices as turmeric, red pepper, black pepper, licorice, clove, ginger, garlic, coriander, and cinnamon target inflammatory pathways, thereby may prevent neurodegenerative diseases." [17] Numerous further studies have found anti-inflammatory effects for ginger.

Rosemary (Rosmarinus officinalis L.) is a very popular culinary and therapeutic herb around the world. It has been used in folk medicine for centuries to treat many ailments including headaches, epilepsy and poor circulation. Several lab studies have found anti-inflammatory effects for Rosemary.

Cinnamon has been loved for centuries owing to its flavor - however in the past few years numerous studies have discovered therapeutic potential. A 2008 study found that essential oil of Cinnamon twigs had "excellent anti-inflammatory activities". [18]More studies.